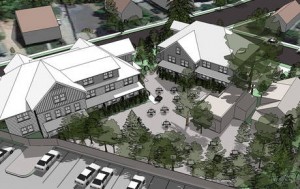 New development in and around Bend has certainly been at the top of mind in the resurgent last few years on the High Desert. For better or for worse, growth is on most everybody’s mind here in Bend.

But new development is not all that has been going up. In fact, there have been some interesting redevelopment and expansion news of late.

Redevelopment or an expansion of an existing property can be a particular boon to some areas, particularly those that are underserved or in need of revitalization.

Some projects we have known about, such as the expansion of McMenamin’s Old St. Francis School in downtown Bend. Construction on the three-story buildings, which will add 41 new rooms and 19,368 square feet to McMenamin’s, has begun and are slated to be completed by July. That should add some much-needed hotel space in downtown Bend.

And Deschutes Brewery is moving forward on yet another expansion, another sign of the health of the area’s bellwether brewery.

There are also some potential redevelopment projects yet to come to fruition. That includes:

There is so much to look forward to in this thriving city. The most exciting thing might be knowing that some of the most interesting projects might only be idea in someone’s head as of yet.