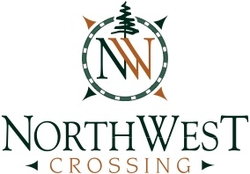 By most any measure this has been a very good year at NorthWest Crossing, easily among the most talked about neighborhoods in Bend, Oregon.

For those of us who live in town, we know the buzz that has surrounded the unique live-work development on Bend’s westside for years. The development was built to be walkable and friendly, with a location that is just steps away from restaurants, shops, great schools, parks and the outdoor attractions that draw so many to this region.

Not surprisingly, data shows that NorthWest Crossing is as popular as ever. In fact, NWX seems to be enjoying its best year yet.

How good? Let’s delve into the data, which dates back to the development’s inception in 2002.

For starters, 42 NWX units were sold in the third quarter, which ended on Sept. 30, shattering the previous quarterly record of 34 set in the third quarter of 2013. Perhaps even more impressive is that through October, 99 units have sold this year. With two full months left in 2015, the year-to-date tally is already the third highest full-year mark on record, and just 15 units shy of the annual high set in 2012. 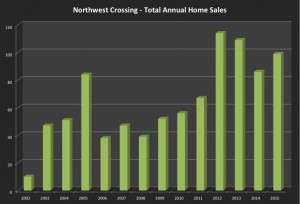 More than that, so far the average for the days on market for each unit is at 134 days this year, which is the shortest since 2013 and the second shortest on record.

We have seen this spiking interest first hand at the Bungalows at NWX, which has proven to be a hit since the completion earlier this year of the first five units of its first phase.

The good news is not limited to just the third quarter, either. Some other findings from the newest set of data:

Of course, the best days of NorthWest Crossing are just beginning, and knowing the area certainly has its advantages. As a Realtor and 12-year resident of NWX, I can help find your dream home.