Bend prices down slightly in December off record high 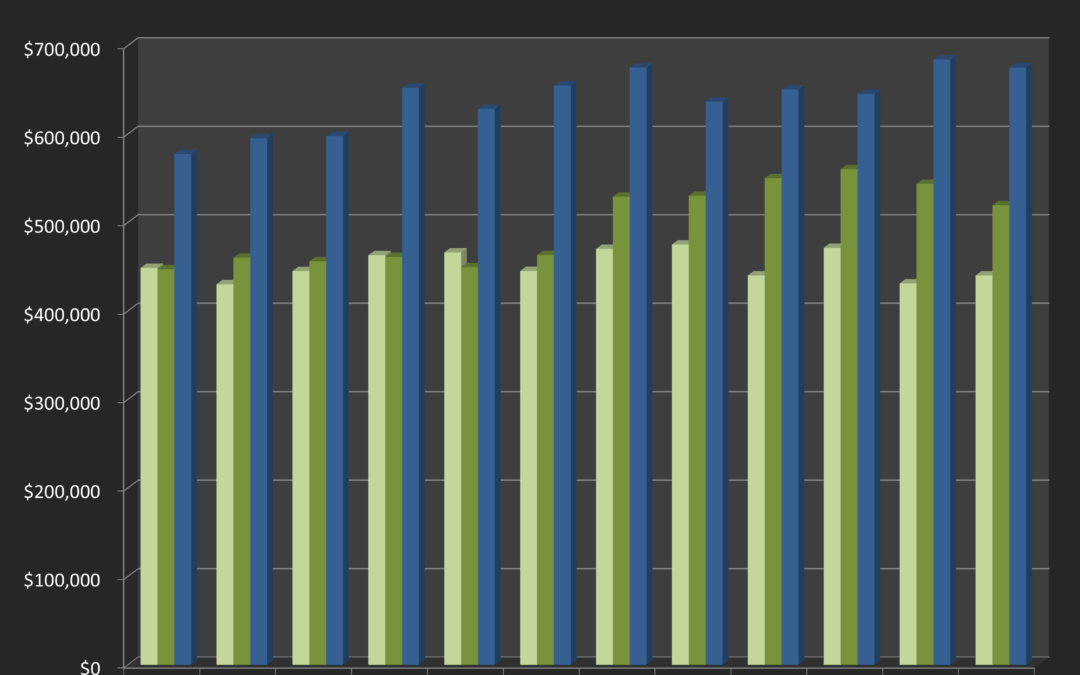 The graph depicting month-by-month median sales prices in the Bend, Oregon, real estate market in 2021 shows a general pattern: There are a few months following a trend of increasing prices, followed by a consolidation at a level lower than the most recent maximum – but higher than the beginning of the previous series. And that consolidation, last year at least, was the base of another series of increases.

There’s no guarantee that December’s median sales price of $675,000 will be a launch point for another few months of an upward trend in the Bend, Oregon, real estate market. But the pattern from 2021, in addition to seasonal effects on the real estate market, appears to provide an adequate fit to the data from December. 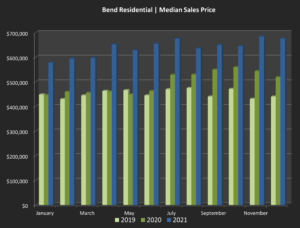 To elaborate on last year’s trend, one can see the median price rising each month from January to April, when it reached $652,000. In May, the median price dropped to $628,250, which was followed by two more months of increases before the next drop. In all, the monthly median price set a record in seven months last year. Price declines occurred in four months in 2021, but never in consecutive months.

December’s median price was a decline of 1.3 percent from November’s record high of $684,000. That 1.3 percent drop in December is the median month-to-month change for December from 2011 to 2021, so it’s nothing out of the ordinary.

On a year-to-year basis, December’s median price was 30 percent higher than the same data point a year earlier ($519,388). December was the ninth of 12 months in which the year-to-year median price increased by at least 25 percent.

Sales activity in December appeared pretty typical for this time of year. The homes sold (172) were the fewest since February, reflecting the usual quieting of the market as fall turns to winter. The average days on market was 30 days. That’s the second-highest for any month in 2021, but it’s also the second-lowest for any December in our data set (which dates to the start of 2007). December ended with 0.8 month of inventory, the lowest since June and second-lowest for any December on record.

It seems clear that the COVID-19 pandemic is still influencing the Bend, Oregon, real estate market, with too few homes to meet a consistent demand. How long that stays the case is impossible to predict. Regardless, having a trusted Realtor on your side will be beneficial. I have experienced all types of market environments and have a deep, broad knowledge of the Bend, Oregon, real estate market. If you’re in the market to buy a home or considering selling your current home, I encourage you to contact me at (541) 362-1031 or to visit Bend Property Search to connect with me through my website.