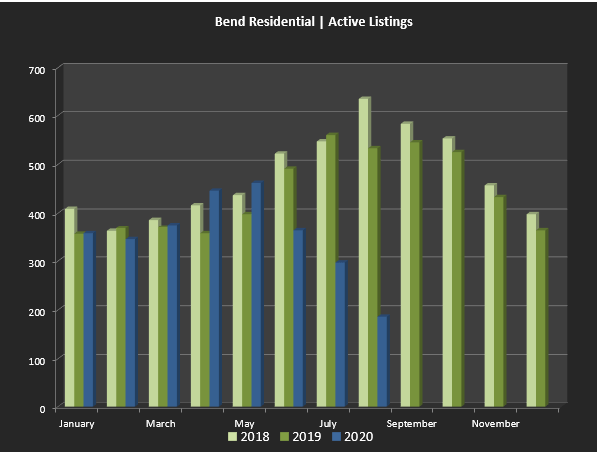 Whatever metric you want to use, the numbers paint a pretty clear picture of the Bend, Oregon, real estate market: There is not enough supply of homes to meet buyers’ demand. Not nearly enough.

Speaking of August’s sales figures in general terms, lots of homes were sold. But not so many homes came onto the market. The inventory of homes in August was 0.6 month. That means that at the pace of sales in August, every home on the market would be sold in about 18 days. Eighteen days – when six months is regarded as the dividing line between a buyer’s and a seller’s market.

August also ended with 329 pending sales. That’s the third-highest number of end-of-month pending sales – behind July (372) and June (343) of this year.

Circling back to the inventory, the figure of 0.6 month is the third consecutive record low for inventory in Bend.

The numbers from August indicate that homes are being priced to sell quickly. The average sales price-to-list price ratio was 100 percent, and the aggregate change from list price to sale price was minus-1.4 percent – the smallest reduction in the seven years that that data point has been recorded.

It probably shouldn’t come as a surprise that the median sales price in August went up – barely – from the previous month’s figure. The median sales price was $529,950, 0.2 percent more than the then-record $529,000 in July. August’s median price was 11.6 percent more than the same data point from August 2019 – a figure that set what was then a record.

There are probably many factors behind the upward trajectory in Bend’s median sales price. Rates on 30-year mortgages continue to hover around the low-3 percent range. Industry observers say the coronavirus pandemic has prompted many urban residents to seek relocation to an area they can have more space. And August is typically one of the busier months in the Bend, Oregon, real estate market.

Whatever the reason, the Bend market has become even more dynamic than it was just a few months ago. If you’re looking to buy or considering selling your home, I can help guide you to a successful outcome. I have experience in all sorts of market conditions and can bring to bear a deep knowledge of Bend in working for you. I encourage you to contact me at (541) 362-1031 or to visit Bend Property Search to connect with me through my website.